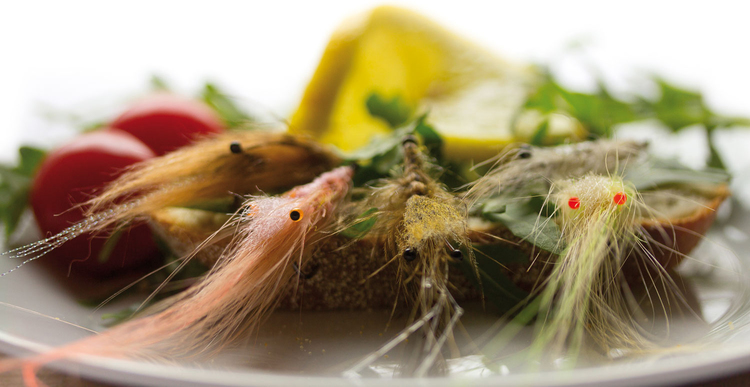 Saltwater fly tying is a rather versatile discipline. Myriads of food items get washed along the coastlines every day, and the sea trout seems to like most of them. So you can wrap up imitations of anything from small gammarus scuds to large sand eels or herring. But one food item is getting a lot of attention in Scandinavia right now, and that’s the shrimp.

Even though we have a long tradition for tying shrimp flies in Scandinavia – with flies like the Magnus, Sandhesten and other pretty simple flies leading the way, the craze took a major leap, when the very competent Danish fly tier and fly fisherman Claus Eriksen introduced his fabulous fly, Pattegrisen – a salmon pink shrimp fly incorporating, among other sexy details, feathers from a Whiting spey neck. When tying the first Pattegrisen Claus actually was inspired by Morten Oland’s Spey Shrimp.

The Pattegrisen was featured in Danish angling film maker, Niels Vestergaard’s film on saltwater fishing – and Scandinavian fishermen soon learned that… looking like a pig wasn’t such a bad thing… if you were a shrimp. Over night the Pattegrisen was on every fisherman’s lips – and, literally spoken, in a lot of sea trout’s lips as well.

Anyway the hype is well deserved. The Pattegrisen is a killer. But all roads eventually lead to Rome, and other fly tiers approach the shrimp through a different route.

One of these is Kern Leo Lund, another Dane, who ties shrimps that looks like a photographic copy of the real thing. His now famous Perfect Leo Shrimp could go through the kitchen door to any seafood restaurant and fool even the pickiest chef. They are works of art.

And other Danish tiers do equally impressive work. Morten Hansen and his Glass Shrimp comes to mind – while Henrik Kure ties shrimps that are more suggestive and impressionistic, but still elegant, delicious and catchy.

Meanwhile the shrimp fever is running up along the Norwegian and Swedish coast as well with tiers like Swedish Jonatan Ternald, Peter Alexandersson, Agne Sjöberg, Albin Löfqvist and Norwegian Eivind Berulfsen burning the midnight oil.

We will like to share the ideas of these, and many other fabulous shrimp maniacs, so check out our shrimp gallery for more inspiration.