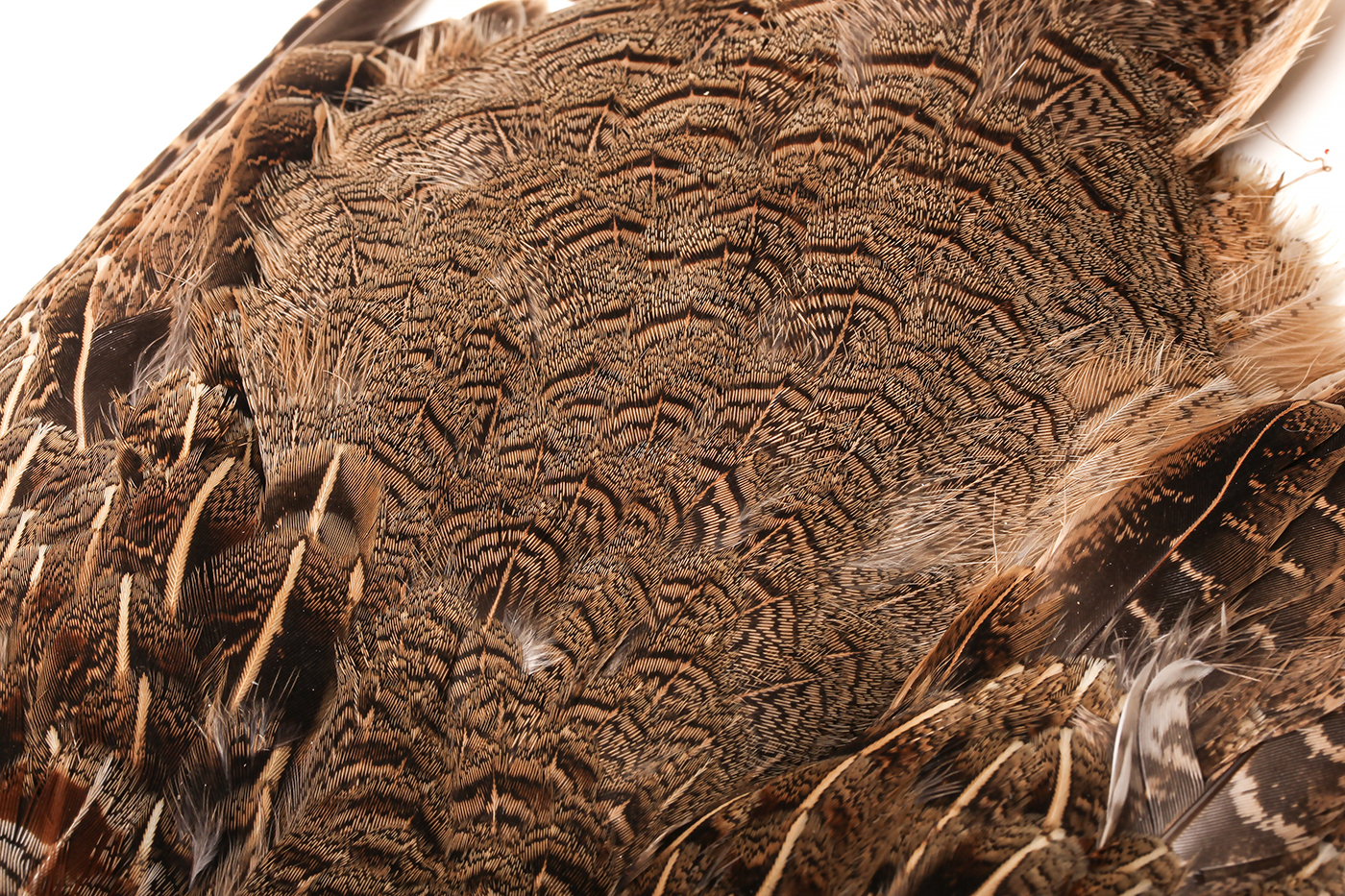 The ultimate game bird for fly tying? Maybe not, but the different feathers from a partridge are amongst the most versatile for nymphs, flymphs, wet flies, spiders and soft hackles. Soft pulsating hackles with an attractive marking that offers plenty of life and movement to the fly.

I’ll hand you over to Håkan Karsnäser, who wrote this in-depth presentation of a partridge skin.

First of all, I know a full skin is more expensive than buying loose feathers packed in a bag, and not all can afford the investment. However, I’m certain that on a longer term the investment probably saves you money. Because you’ll find the most attractive feathers in many more sizes on a full skin, and the full skin offers so many other different feathers than just the neck- and back feathers, for which the bird os rightfully most famous.

It’s not just the size range of the feathers you get from a full skin. A full skin contains feathers in many different colour nuances. On the breast and the sides you find primarily grey mottled feathers. These feathers have longer fibers in relation to the length of the stem, which is also somewhat heavier than other hackles and can tend to twist. The classic Partridge & Orange can be tied with this feather, even though the original dressing lists the brown mottled feather.

On the back, between the wings, you’ll find a section with feathers that are brownish and with a thinner stem. These feathers are present in many sizes and the smallest are found closest to the neck of the bird and they get bigger and bigger the further you move down towards the tail. At the very back are large, very soft feathers that are useful for saltwater flies.

Just behind the head, right at the top of the neck, there’s a small number of feathers that are small enough to tie flies, even down to a size 20. 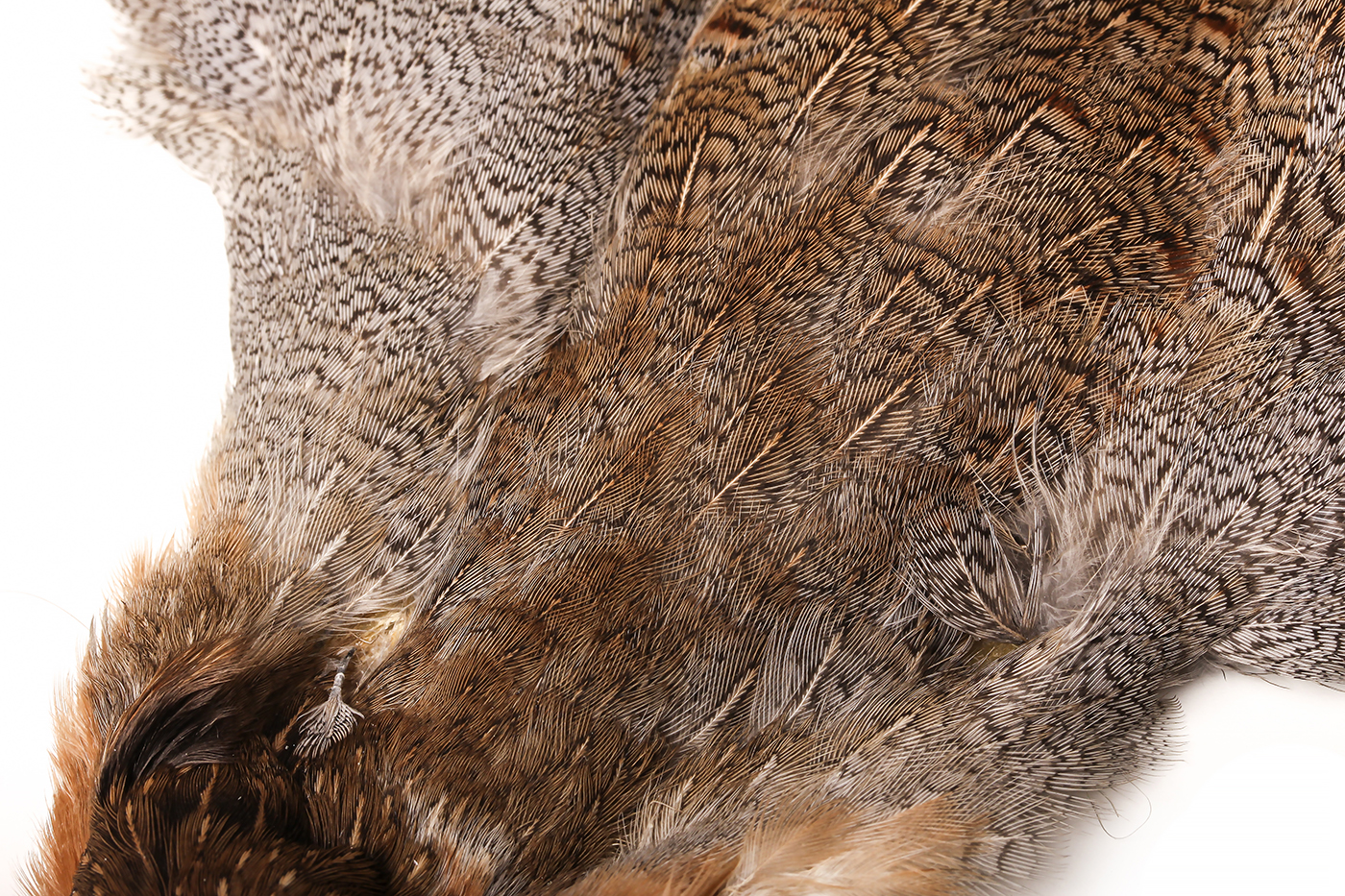 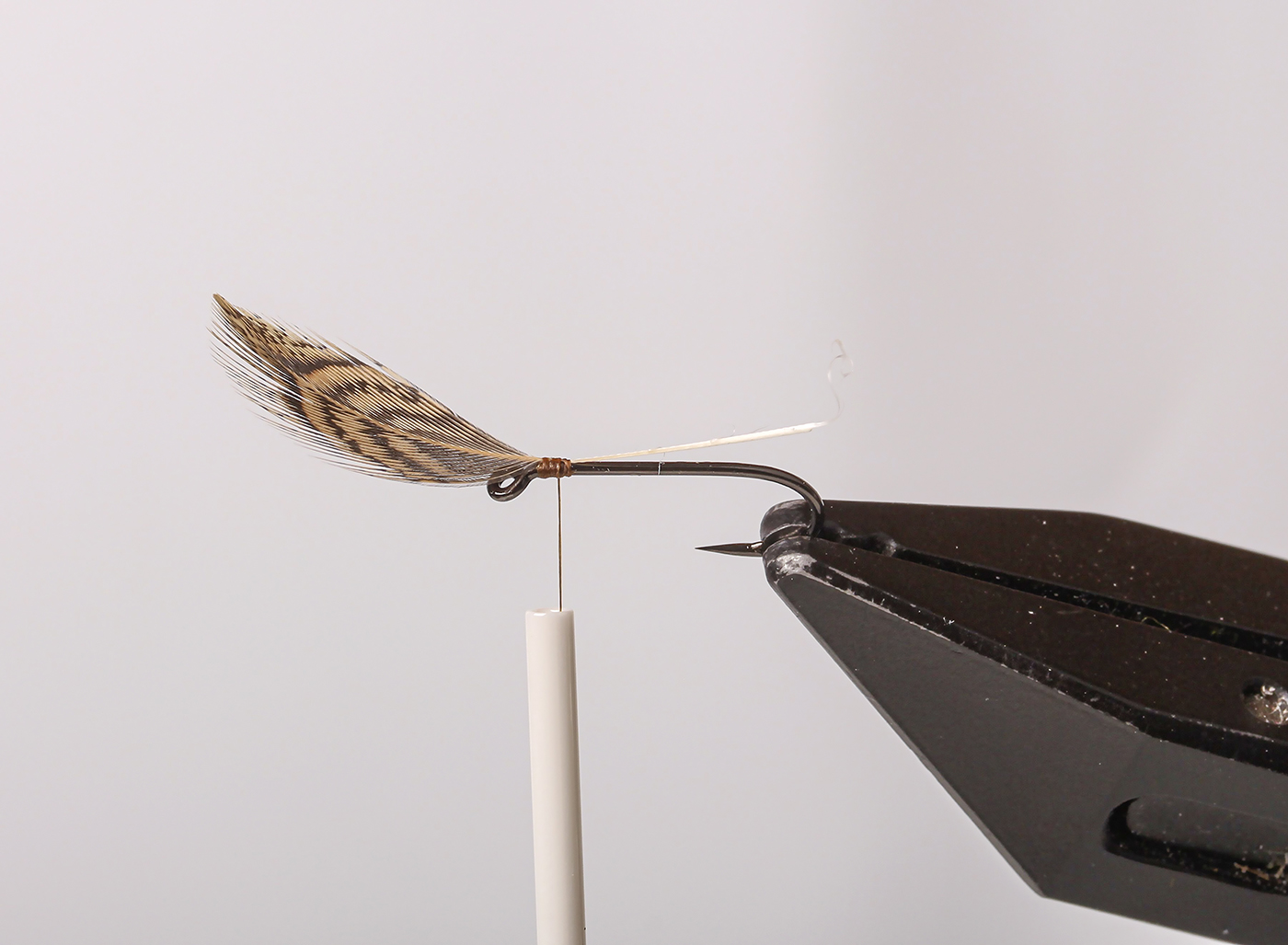 For a flymph/softhackle/spider I always tie in the feather first, behind the hook eye, by the thick end of the stem, the concave side of the hackle upwards. 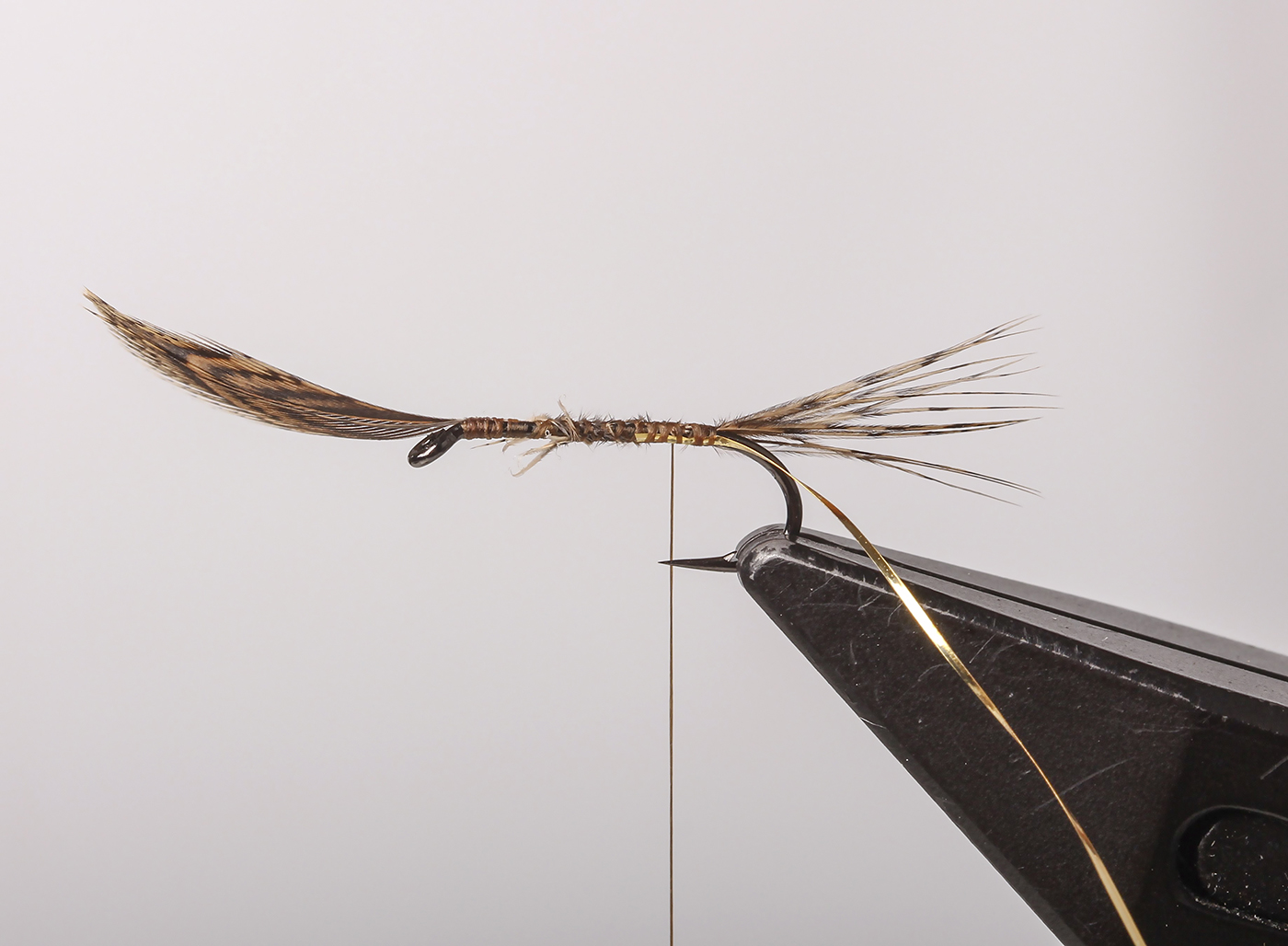 Tie in tail (and ribbing if needed for the dressing). 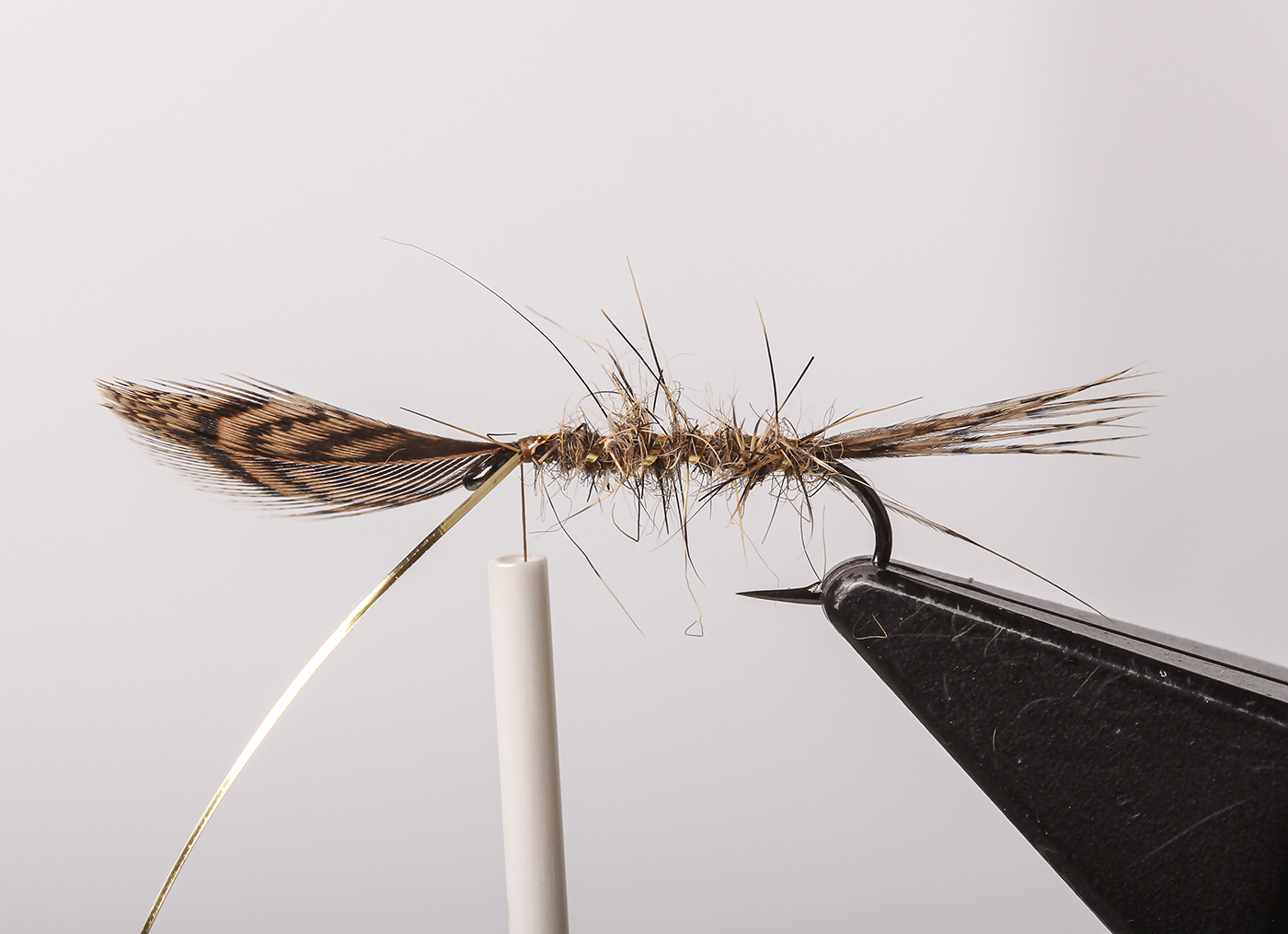 Create the body (here dubbed hare’s fur) and turn the ribbing and secure with a few turns of thread. 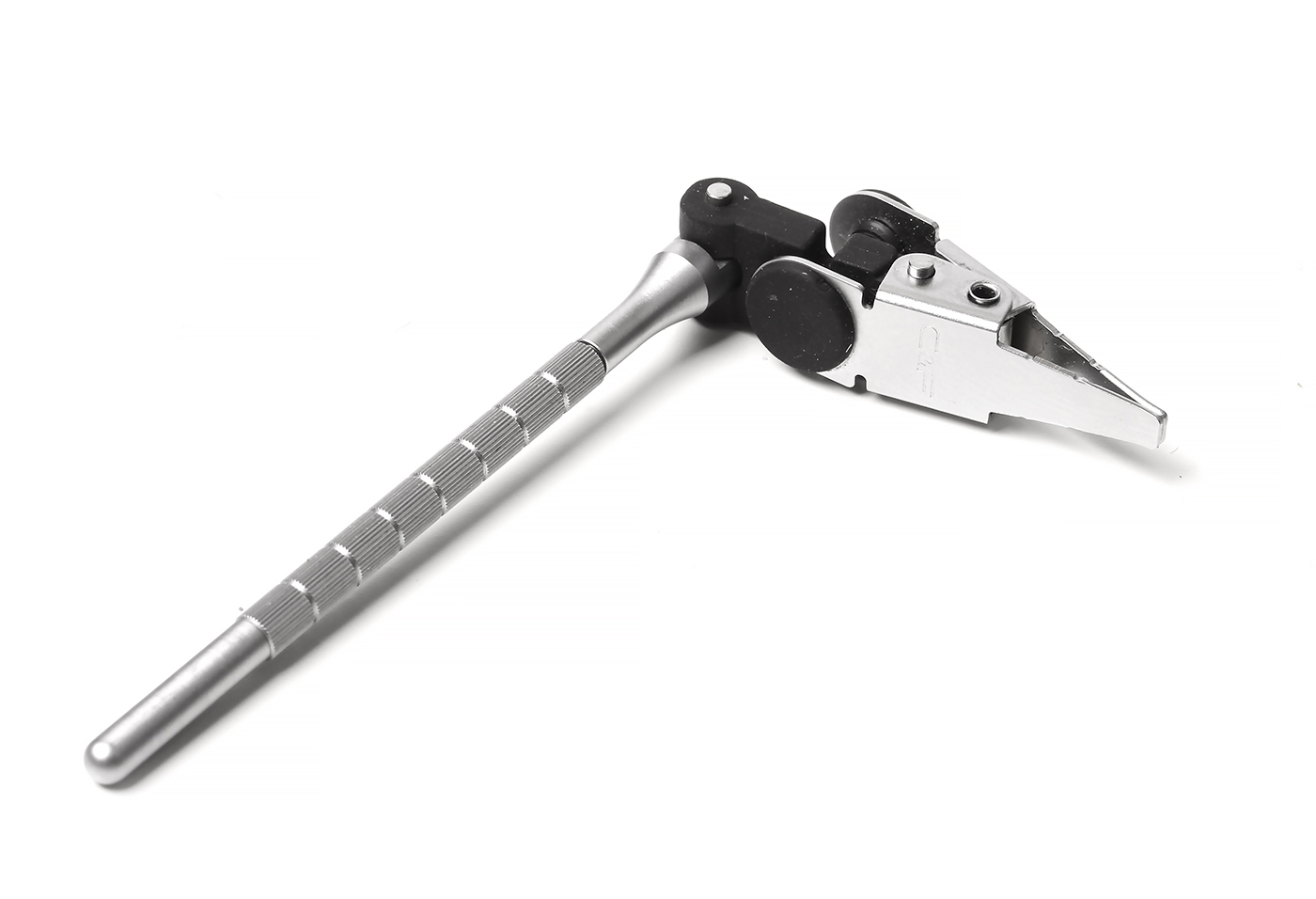 For winding a hackle backwards, I prefer a pair of hackle pliers with a long handle like this. 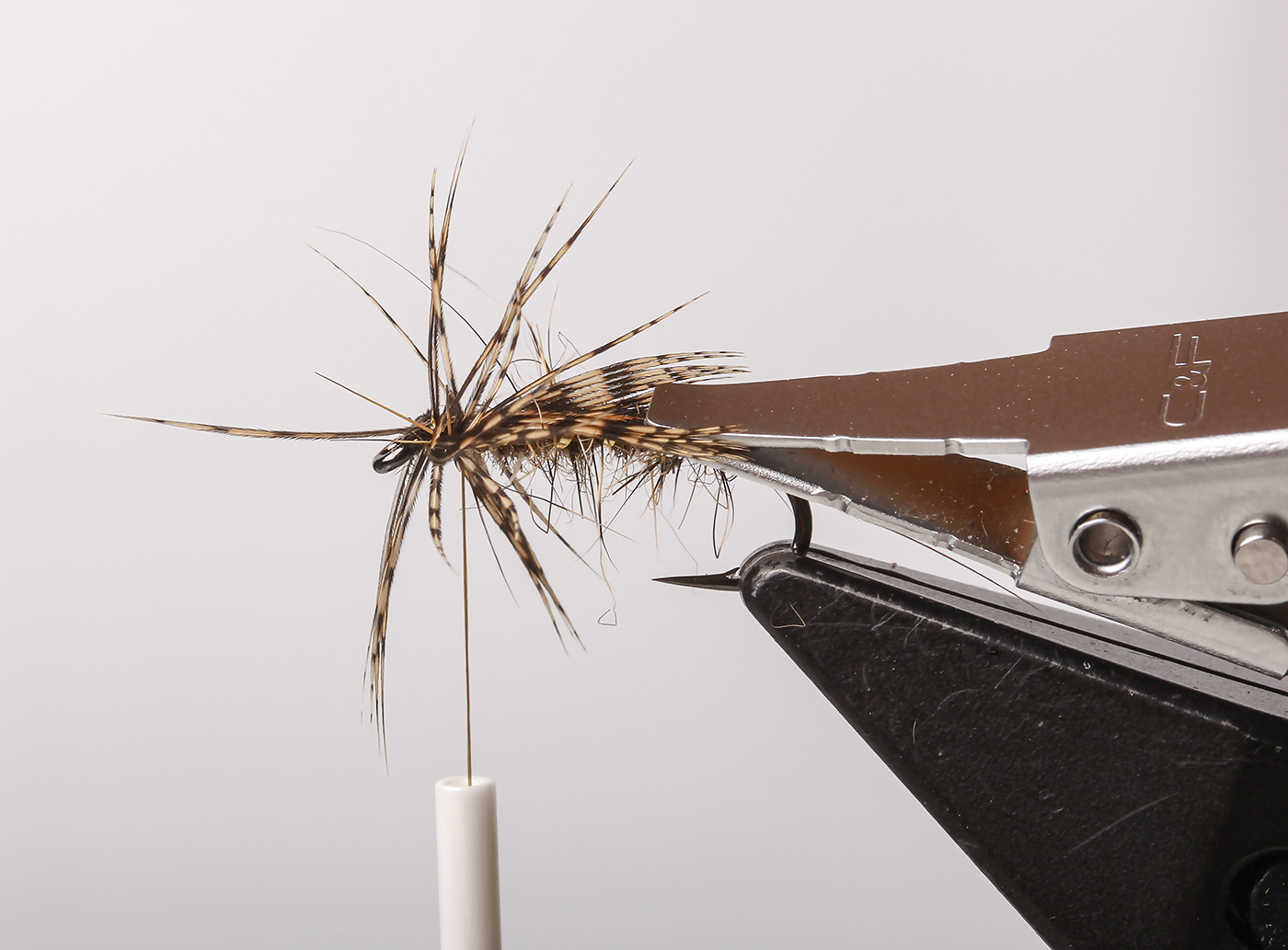 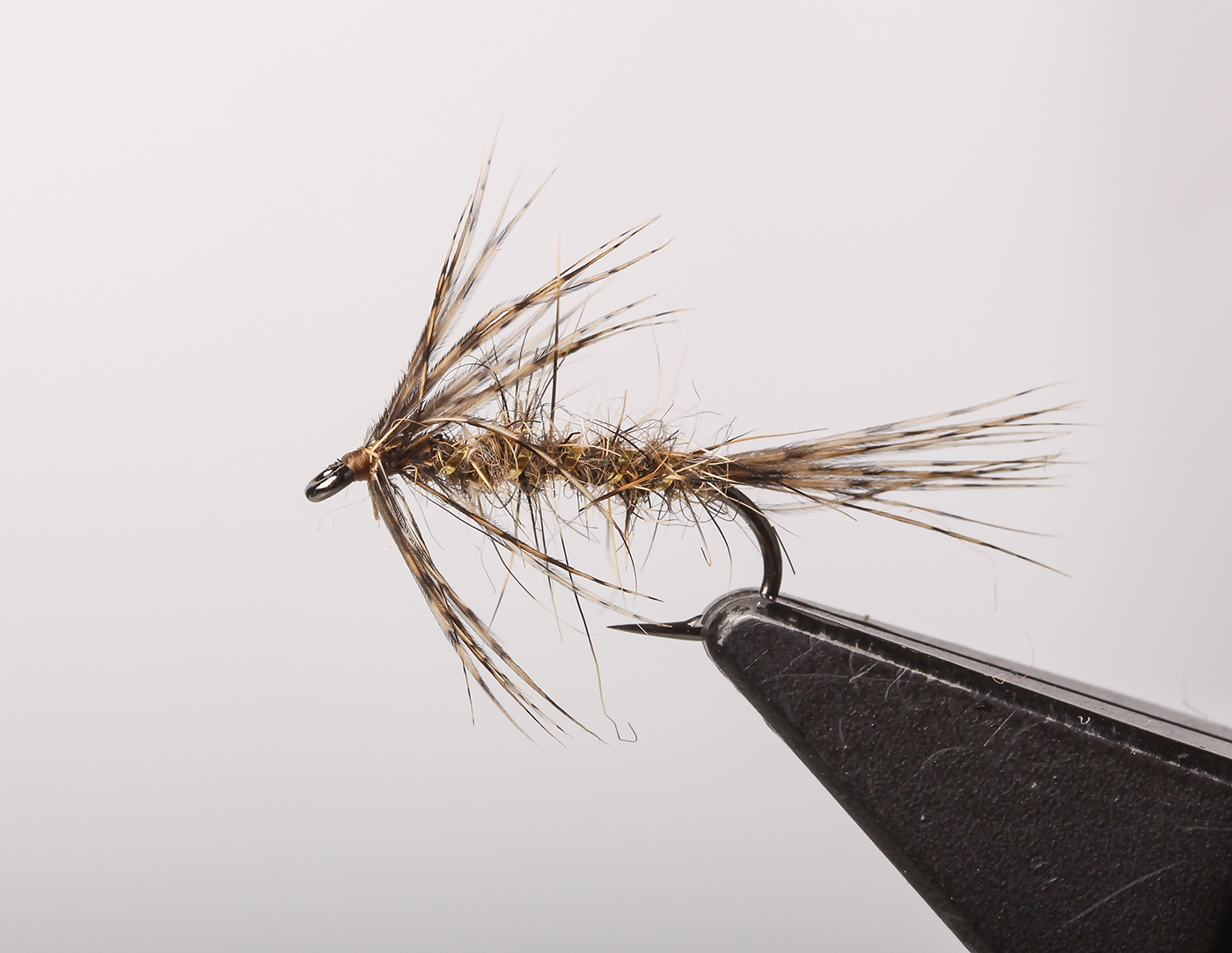 When tying a wet fly, I tie in the hackle after I create the body. 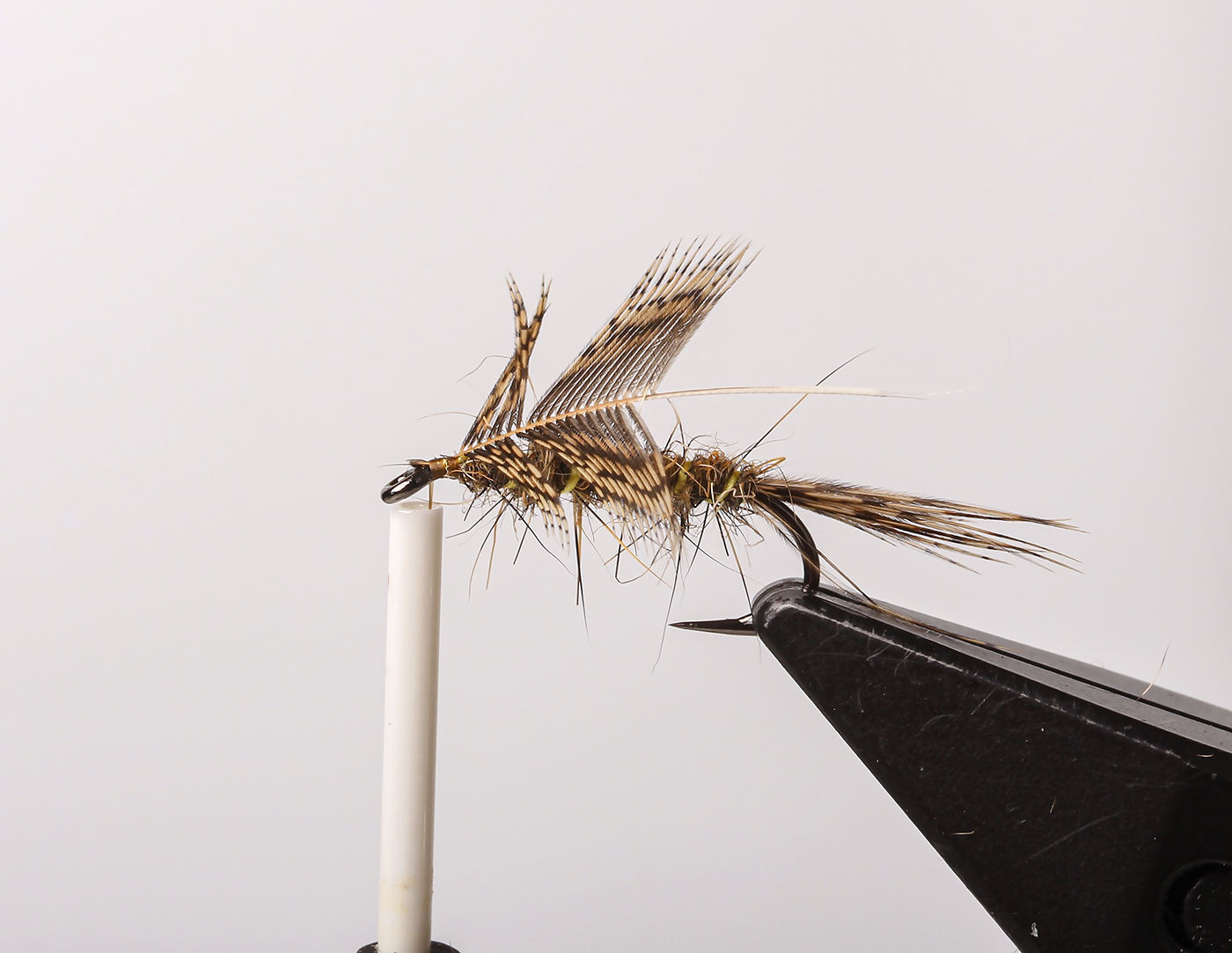 Tie in the tail, the ribbing, dub the body, wind the ribbing. Expose the tip of the feather, cut off and leave a small triangle, which is used to secure the feather behind the hook eye. 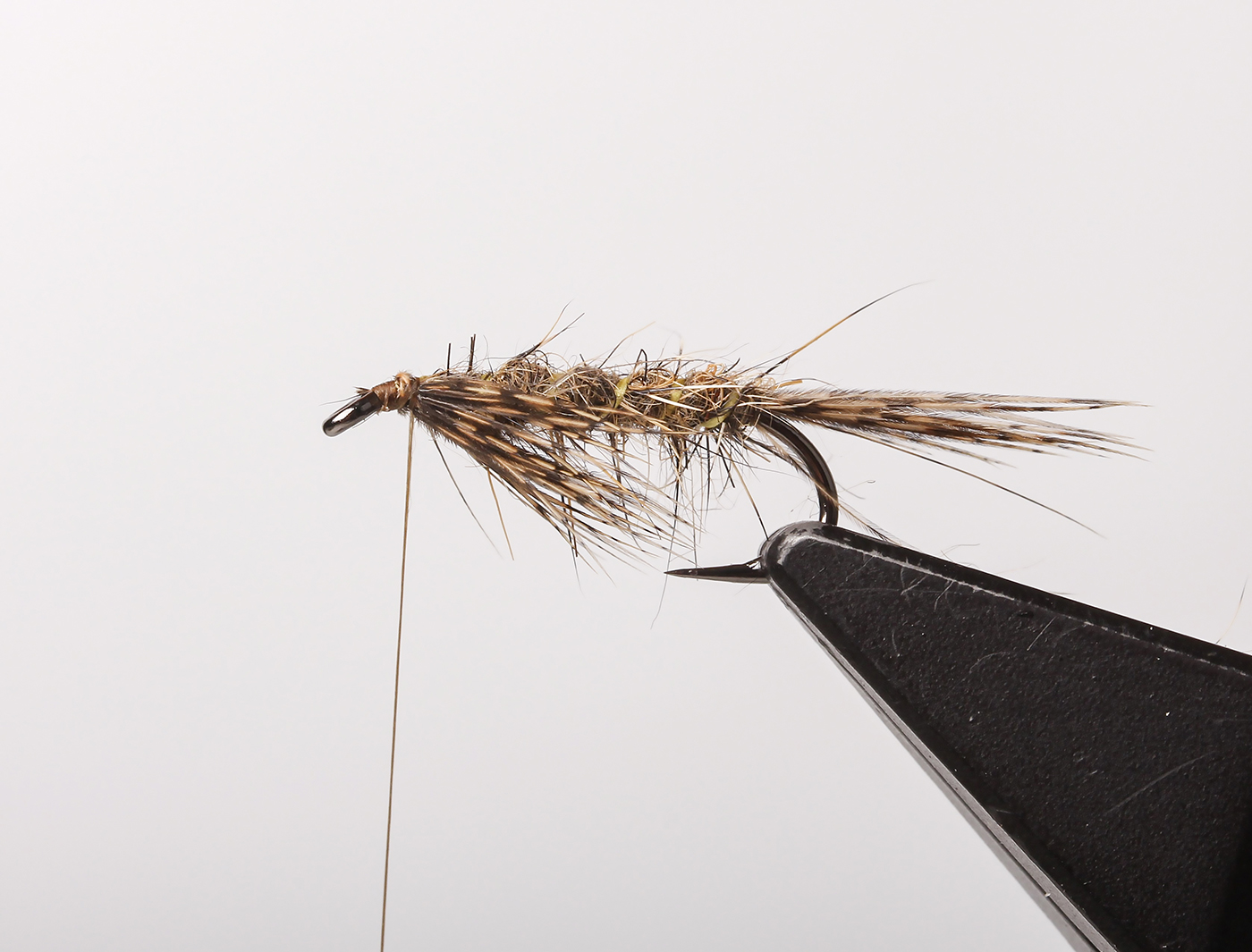 Turn the hackle and cut off waste. A few turns of threads controls the hackle underneath the hook, making room for the wing. 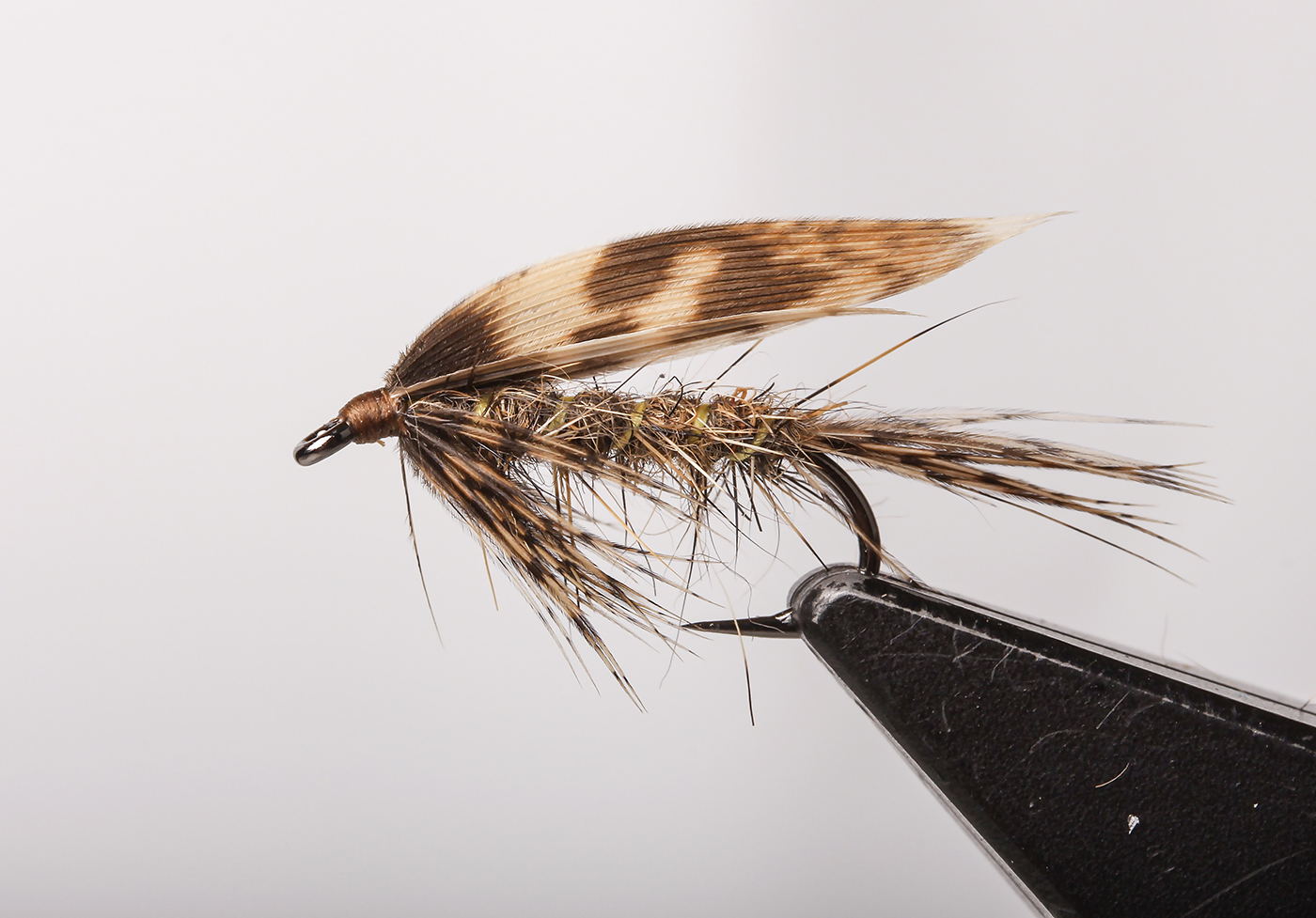 Tie in the wing, cut off close and create a small head.

Just as a partridge, all full skins contain a great number of feathers in all sorts of variants – have fun exploring!