One can almost hear how this fly got its name after it began gaining some popularity. “What did you catch it on?”. “Oh, just the usual one…” So what is Den Vanliga (Swedish for The Usual)? It is an unusually effective salmon fly that we usually tie on tubes, no-body style and with a built in weight.

There’s not much information to be found about this fly, but it’s certain that it comes from Northern Sweden, where it has its home in the Baltic rivers, Byske, Kalix, Skellefteån etc. As far as I know, the pattern was first tied by Swedish Jan Marklund in a slightly different way from that we usually (sorry, it’s going to happen a few more times) see today. I believe that Marklund’s first Usuals were tied on hooks, but the one popular in Scandinavia today is a tube fly. It’s most often (see, I avoided it) tied “no-body-style”, which means that the body is formed by the weight, either a gold or copper US tube or a large cone head in the same colours.

What I do know is that it was Mikael Lindström, a “norrländing” (which is Swedish for a north-lander), who was responsible for its popularity in Southern Scandinavia and in particular in Denmark. I first saw the fly at a fly tying clinic put on by Morten Valeur around 2002 (maybe a little earlier, maybe a little later), where Mikael Lindström (Micke) tied this fly with us.

Micke was also the one to popularise and refine the now very popular technique of long, thin-skinned tapered zonker wings on tube flies. He also widely recognised for his muddler-head-zonker, which is very effective both on tubes and hooks. See the master at work here:

No-body flies with US tubes were already popular and had been for some time, but this was the first time I saw a cone head used instead of the US tube. Other than the US tube/cone head, there’s not much else to the fly. A little gold dubbing in front of the cone head that you brush up to form a “tail”, a yellow underwing, orange middle wing, fiery brown overwing and a roof of (preferably dyed orange) peacock herl. Dispense gold and copper flash generously between the wings. The blue front hackle can be a false hackle that you tie in and lock in position between the orange and the brown wings, or you can tie it in as a collar hackle. Use soft hen hackles. 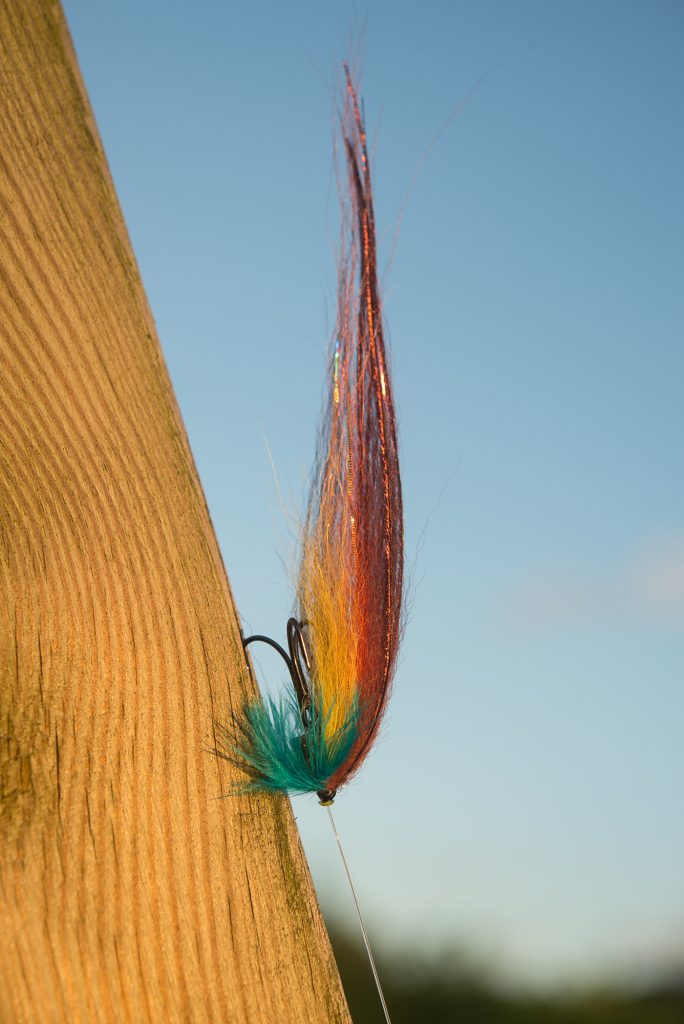 Byske River where it’s extremely popular is a typical, Swedish river, most of the time running with a tint of brown or orange, much like many know from Mörrum and Em (where the fly is also popular). Yellow, orange and brown is just a perfect colour combination in this type of water, where you want some visibility, but still be able to avoid the salmon seeing the fly too soon.

Byske in particular is also quite a fast flowing river, which is why this fly is often tied in quite large sizes – 10cm is not unusual (sorry, couldn’t help it) and larger ones too. In a fast current the long, thin, well-tapered wings with the peacock herl on top just swims like nothing else. It’s no wonder salmon like it.

Try it – I know it does in every water where salmon swim.

Lindström tying another of his favourites – the General Practioner: