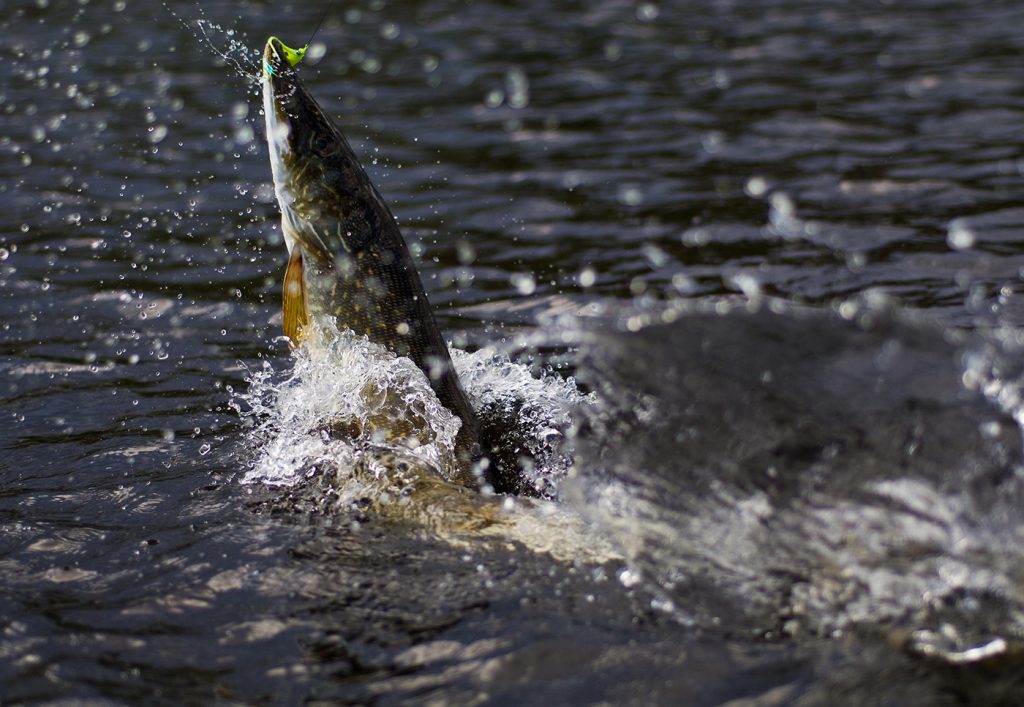 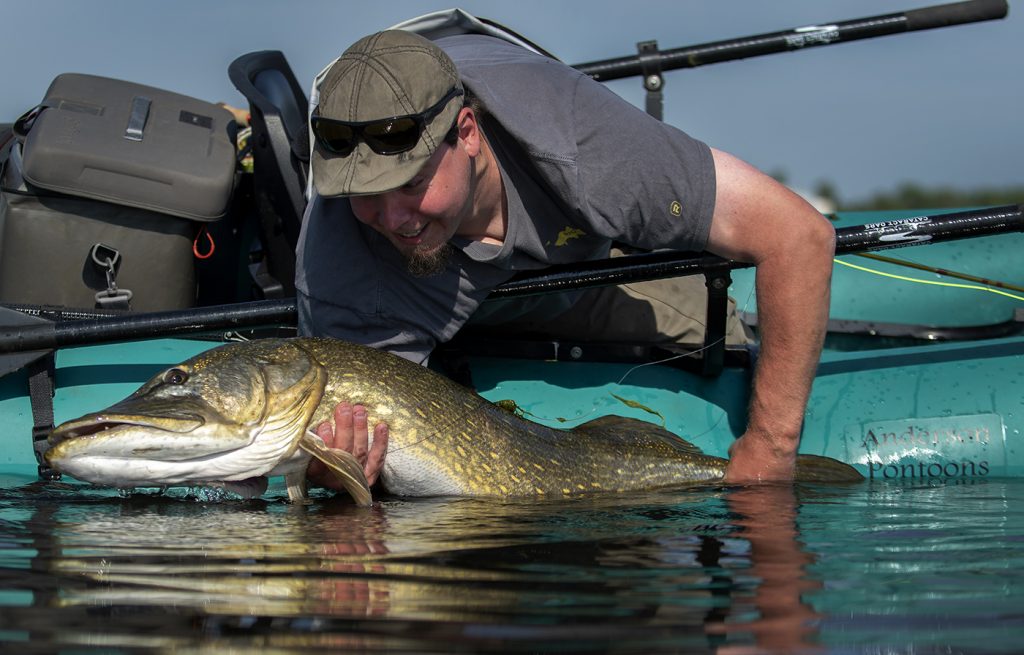 Every lake has its own “Loch Ness Monster” – this beast was caught by Daniel Holm and measured massive 123 cm.

At least in the Northern Hemisphere, one of the best chances of catching a big fish is on the lakes, fishing for pike. And pike are really a interesting species. Not the hardest fighting fish that swim, but the takes – the takes are usually hard and leaves no doubt of the pike’s bad intentions when hitting prey.

May 1st was the opening after the closed season, where pike spawn. Even though they eat throughout, they are hungry afterwards and a lot of conditions align well. Hungry pike, actively feeding in the shallows that are rapidly warming up right now provide the perfect conditions for catching them on the surface. 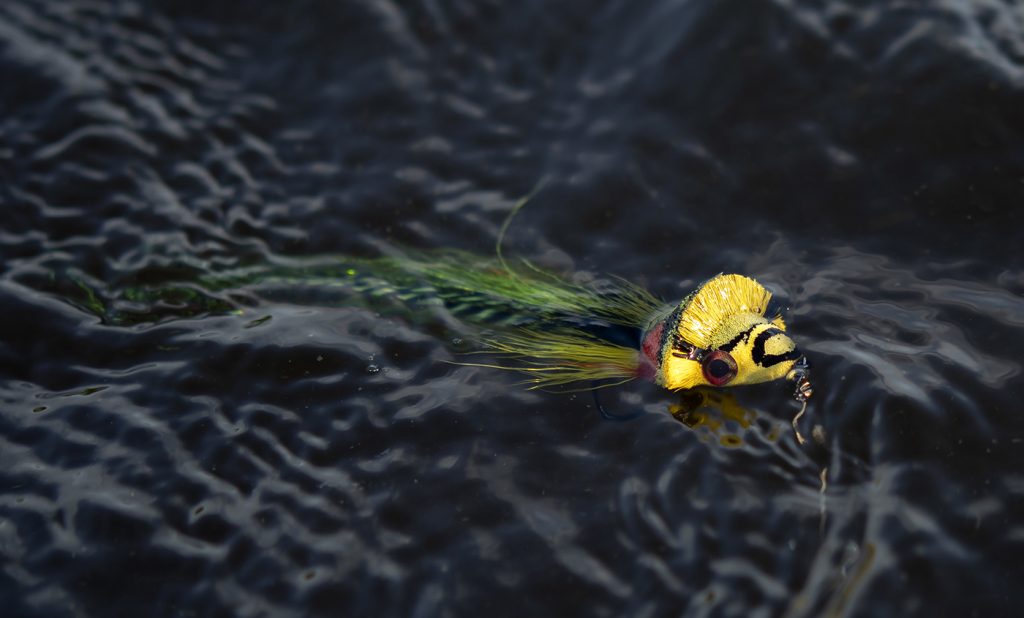 You don’t need shallow water as such, but casting your popper right up against the reeds can produce surprisingly good fishing. You *can* lure them up from the depths, but personally I try to restrict myself to a maximum water depth around a meter or so (3 feet). 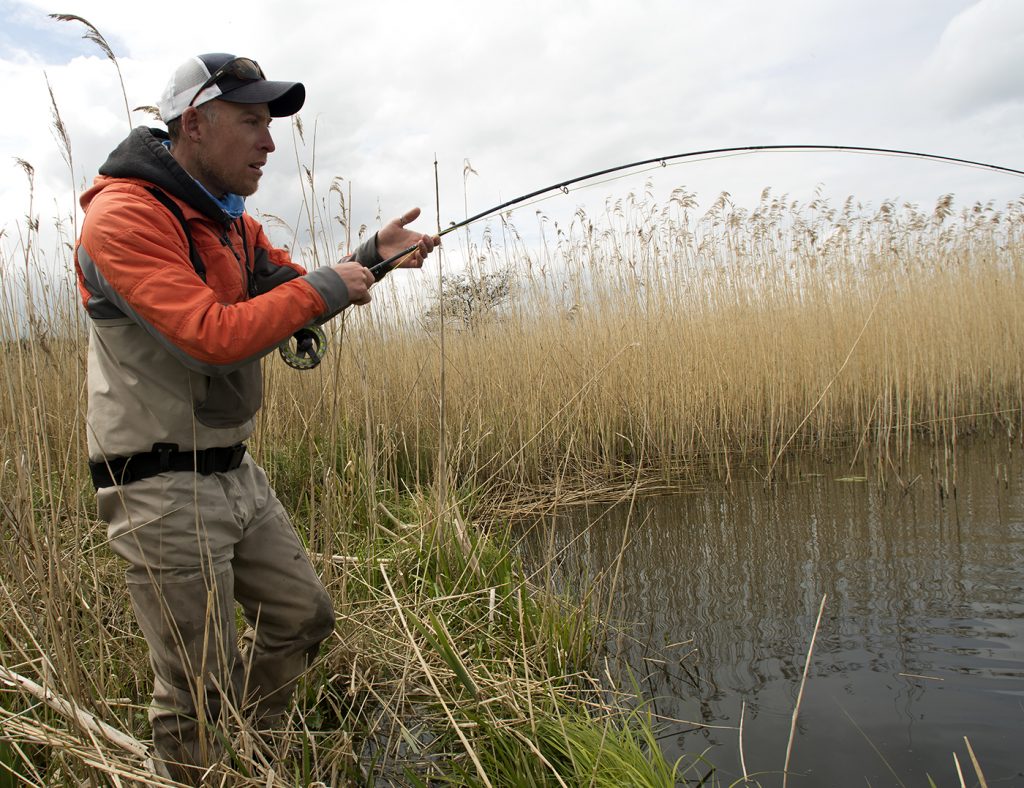 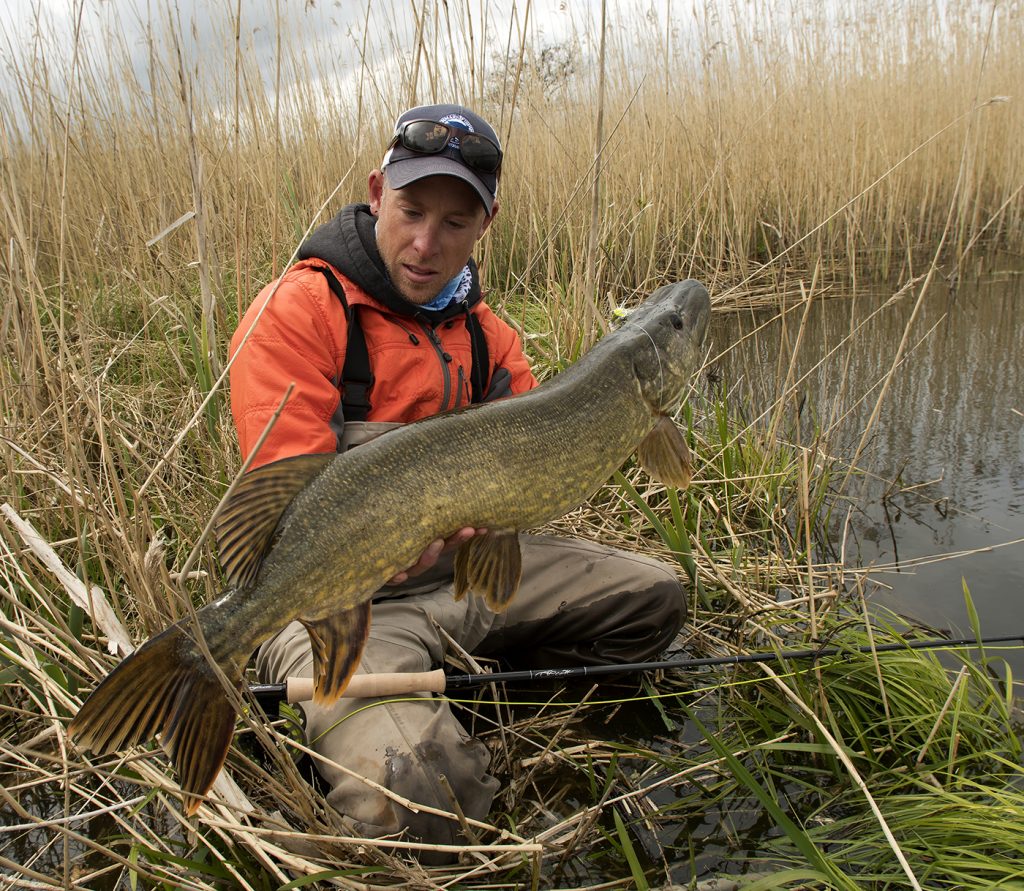 Omar Bo Gade figthing and landing a big pike in a smaller pond.

The takes are always spectacular, but not always alike. Sometimes pike come out of nowhere and hit the popper as if someone dropped a refrigerator on the fly. Sometimes you see them lurking behind the popper, in which case a few hard pulls or a slow increase in speed will usually make them strike. And sometimes – and perhaps most spectacularly, they appear in the surface quite a ways from the popper, race up behind it like a rising submarine to grab the fly. 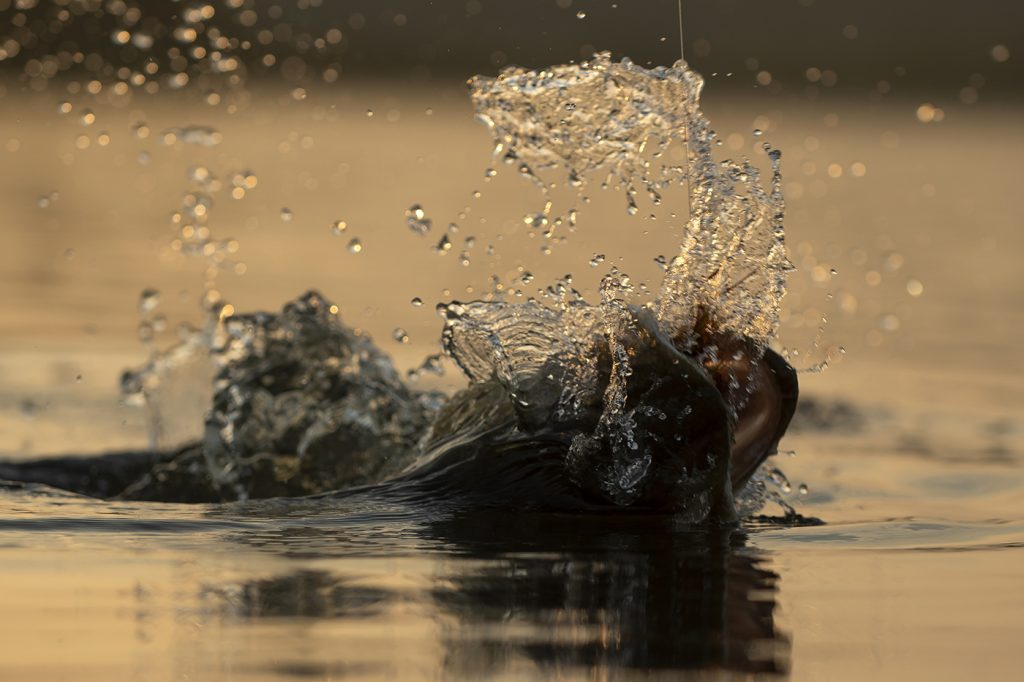 Even if they aren’t big this is still great fun and even, right now, a very effective way to catch pike. The big lakes often hold the bigger fish, but even without access to big lakes, you can still have good pike fishing. Smaller lakes are often private. But a polite knock on the door, perhaps with a good bottle of red wine, often results in a permission to fish. Maybe not on a regular basis, but every now and then. Just remember that pike are susceptible to over fishing. Even what might seem a really good fishery to begin with can be over fished fairly quickly, even by few a fishers. Limiting your self and taking care of the water and the fish ensures a stable fishery over time. 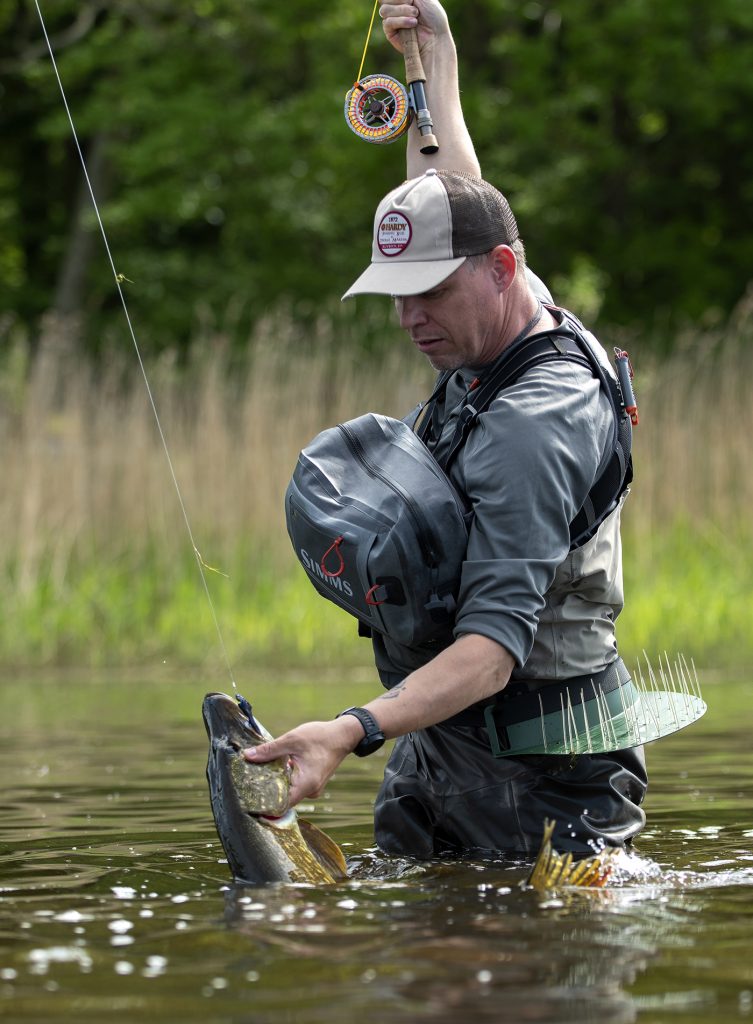 We recommend using barbless hooks, both for the sake of the fish, but certainly also your self. A pike has approximately 700 razor sharp (and if you haven’t fished for them before, take note that they really are *razor sharp*), so the easier they are to unhook, the less likely you are to get hurt. A few superficial cuts are part of the game, but be careful. If you net them, use a big net with rubber mesh and if you use your hands, learn the “pike-grip” that offers a good hold on the pike and avoid lifting them out of the water. 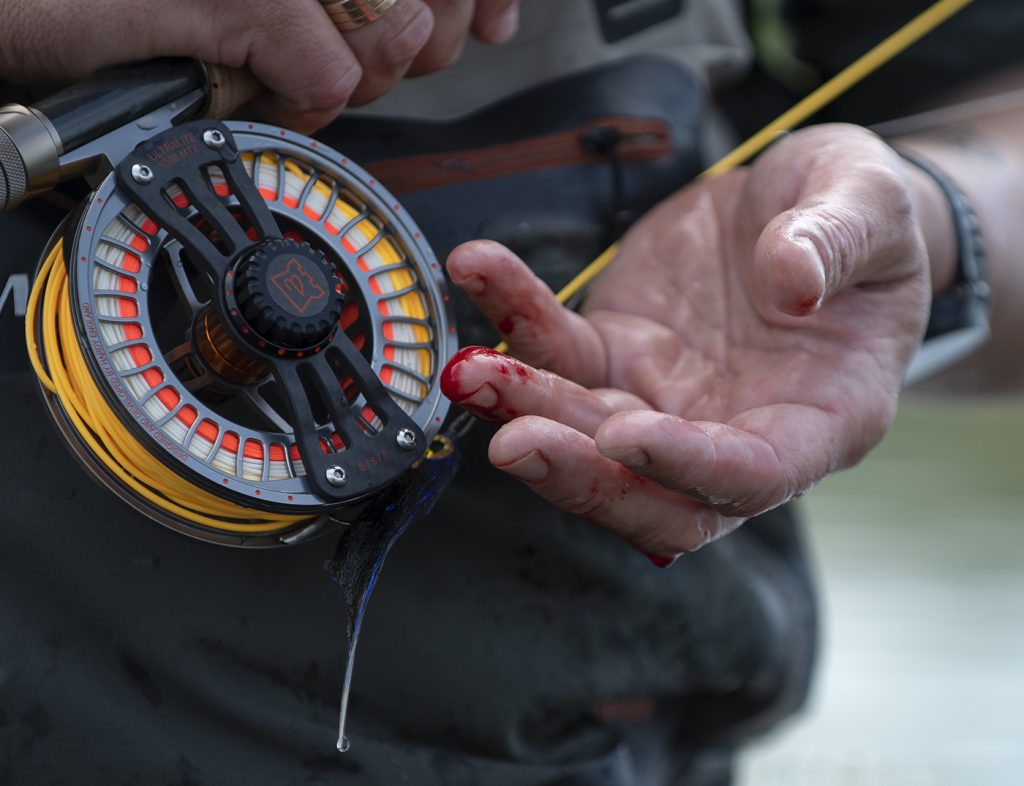 … but still fingers can slip and the pike get a kind of revenge.

It’s right now, get out there and have some fun!

If you are looking for inspiration for flies for some surface-action, we have had the deer-hair tying expert Andreas Andersson behind the vice tying one of his favorite flies for fishing divers and poppers for pike (and other big predators). Here it is the classic Dahlberg Diver tied to perfection by the master and with wellpacked deer-hair.