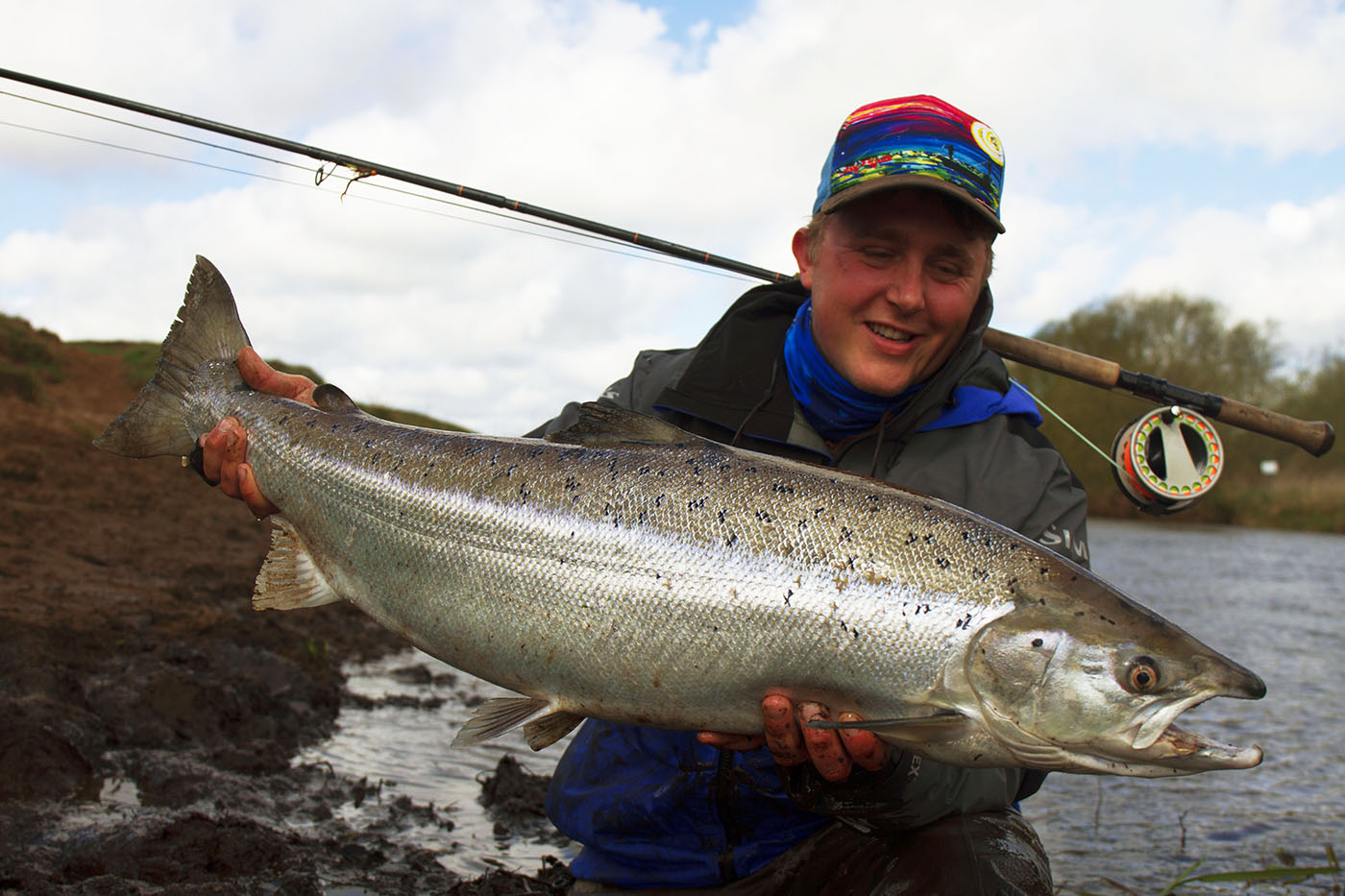 Mathias “Tuben” Ibsen with the stuff we have been dreaming for… Silvershining salmon from the opening day of the salmon rivers.

I’m writing this on Thursday April 9th, which means that there is exactly one week until the opening of the Danish salmon season. By the time you read this, there are only six days. I’ve mentioned this before, but we’ve had the wettest winter since we began recording weather data in the middle of the 19th century, so I’m quite convinced that there are plenty of salmon in the rivers.

One salmon river is already open – Gudenå (directly translated, the River of the Gods). The last wild wild salmon died out in that river in 1920, when a dam for an electrical plant was put up. Salmon are only present naturally in western Denmark (the Jutland peninsula – the one attached to Germany) and Gudenå is the only eastern flowing river that has a natural salmon population (there’s not able to reproduce now due to the dam, so the population is entirely stocked). All other rivers with wild salmon populations flow west, and the biggest and most well known are Skjern River, Varde River and Storå River (Storå literally means “big river”).

Just like anywhere else in the world, the Danish salmon opening is something hundreds and hundreds (if not thousands) of fishers look forward to and for good reasons. The Danish spring salmon are extremely beautiful and generally speaking, the chances for really big salmon are very real.

The tackle is a little special. Despite the names, the rivers aren’t particularly big, so you don’t need the tackle many associate with salmon openings. A 12’6”-13’ rod, 7- or 8-wt (casting around 30 grams) is fine. You’ll need the relatively heavy line weight to combat the wind sometimes. We fish fast sinking lines as a general rule. Everything depends on water levels of course, but a sink 4 is minimum for opening days, and often something heavier. I always carry “everything” from a sink 2 to a sink 6 or 7. Whether you go for shooting heads or a skagit system is up to your self – both work. 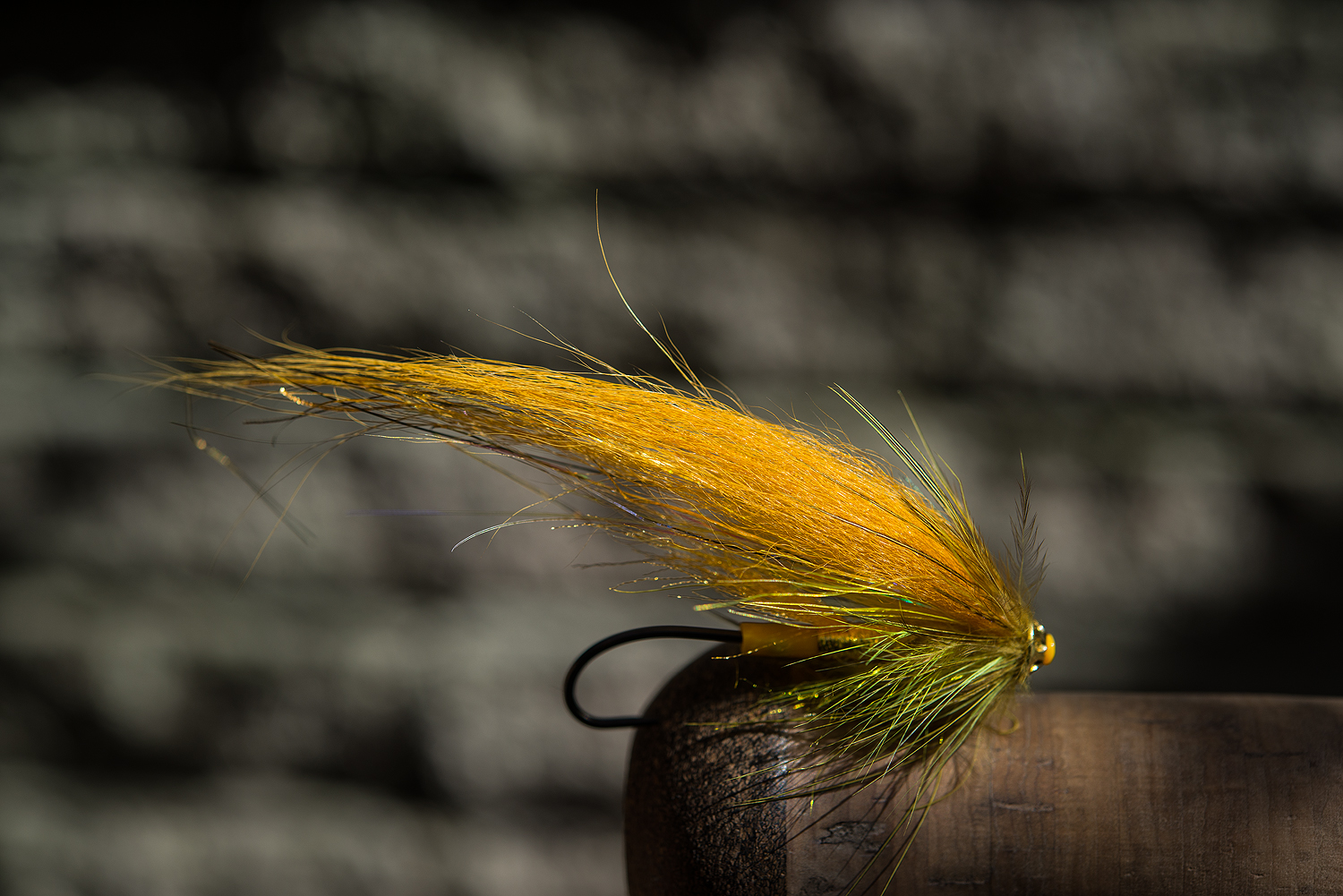 If I am to be perfectly honest, I really don’t think the specific fly matters very much, certainly not during the opening days. If the salmon can see your fly, they’ll play along. And that mostly depends on your presentation and fly size. So don’t go too small either. That being said, 99,7% of us (me included) believe that patterns matter and if you were to take a stroll down the river on opening day and check the flies on every rod you pass, I think you’ll find plenty of the Banana Fly or variations there of. The Banana Fly was conceived by Swedish Mikael Anderson in 1999 and it’s been doing really well everywhere in Scandinavia since.

What you need to keep in mind is that “clear water” doesn’t happen in Denmark. Right now I doubt the visibility is more than 50cm, and it’s “very” rarely over 1m. That would usually mean quite big flies (10cm or larger), but bear in mind that the danish rivers aren’t like Gaula or other big, fast flowing rivers. A slow current lets the salmon see the fly sooner than if the current ripped the fly across river. So go a little smaller. The river’s aren’t cold, so personally I’d go with something around 5-7cm.

Some weight on the fly is a good idea to help the fly fish at a depth as soon as possible after the cast has landed. If you fish tube flies, get some weight on and if you fish hooks, use heavy wire singles (singles fish deeper than doubles and catch less weed). And note that “if” you prefer doubles or trebles (as hook flies or on your tube flies), a maximum hook gape of 7mm is allowed. Singes are allowed a 10mm maximum hook gape. In Ahrex models that means that the following models and sizes from the Home Run series are allowed:

In general, please note that under each hook model you can find a product sheet with all details – here’s an example of the Single Tube HR430: 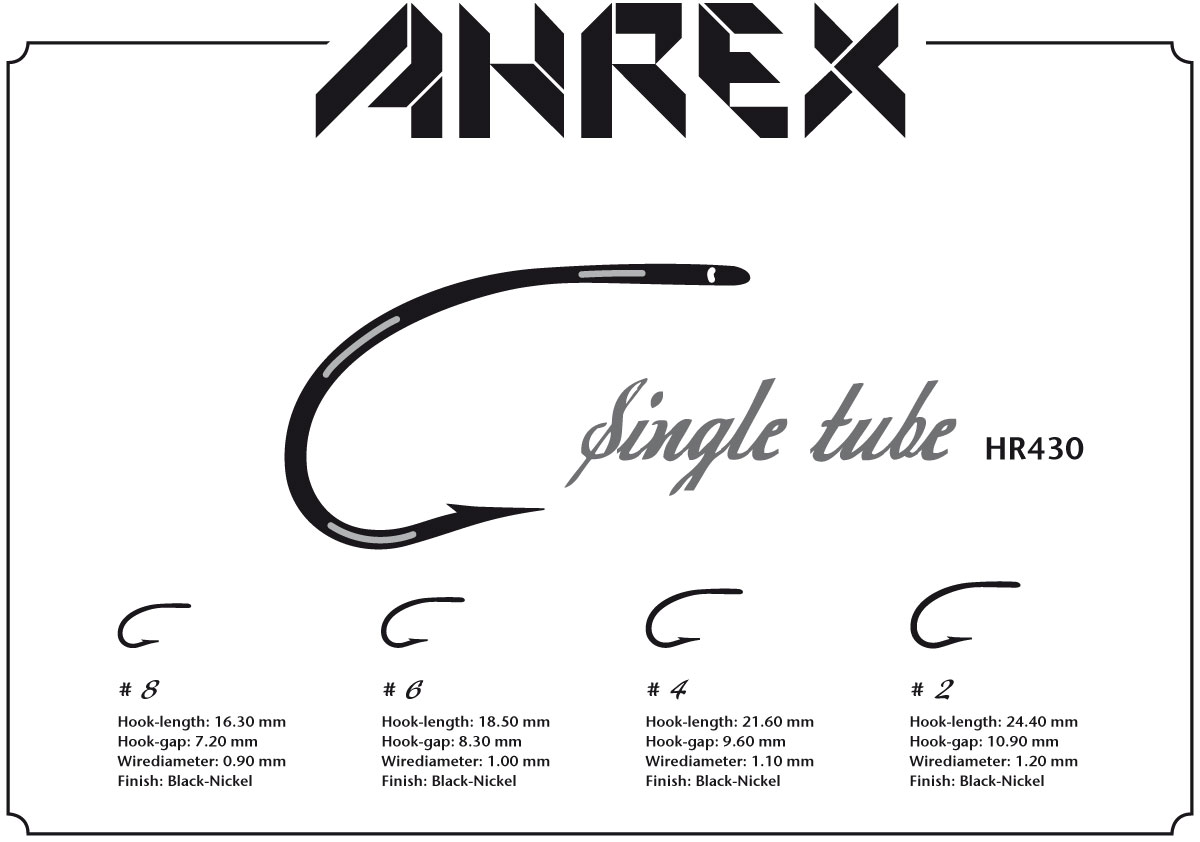 Swedish legend in both fishing and flytying, Micke Lindström with a beautiful may-springer from River Skjern last year.

The popularity of the Banana Fly is even reflected on our YouTube-channel, where you’ll find three variants by three different tiers.

The Sunburst Zonker by another legendary, Swedish Mikael, this time Lindström:

Other flies and other styles are of course also both effective and popular. Ullsock-style patterns (triple hackle flies, particularly known from River Mörrum in southern Sweden) popular in several colour-combinations. Originally the Banana Fly was tied in the modern, Scandinavian soft-hair-wing-style and many patterns in this style are of course also effective. 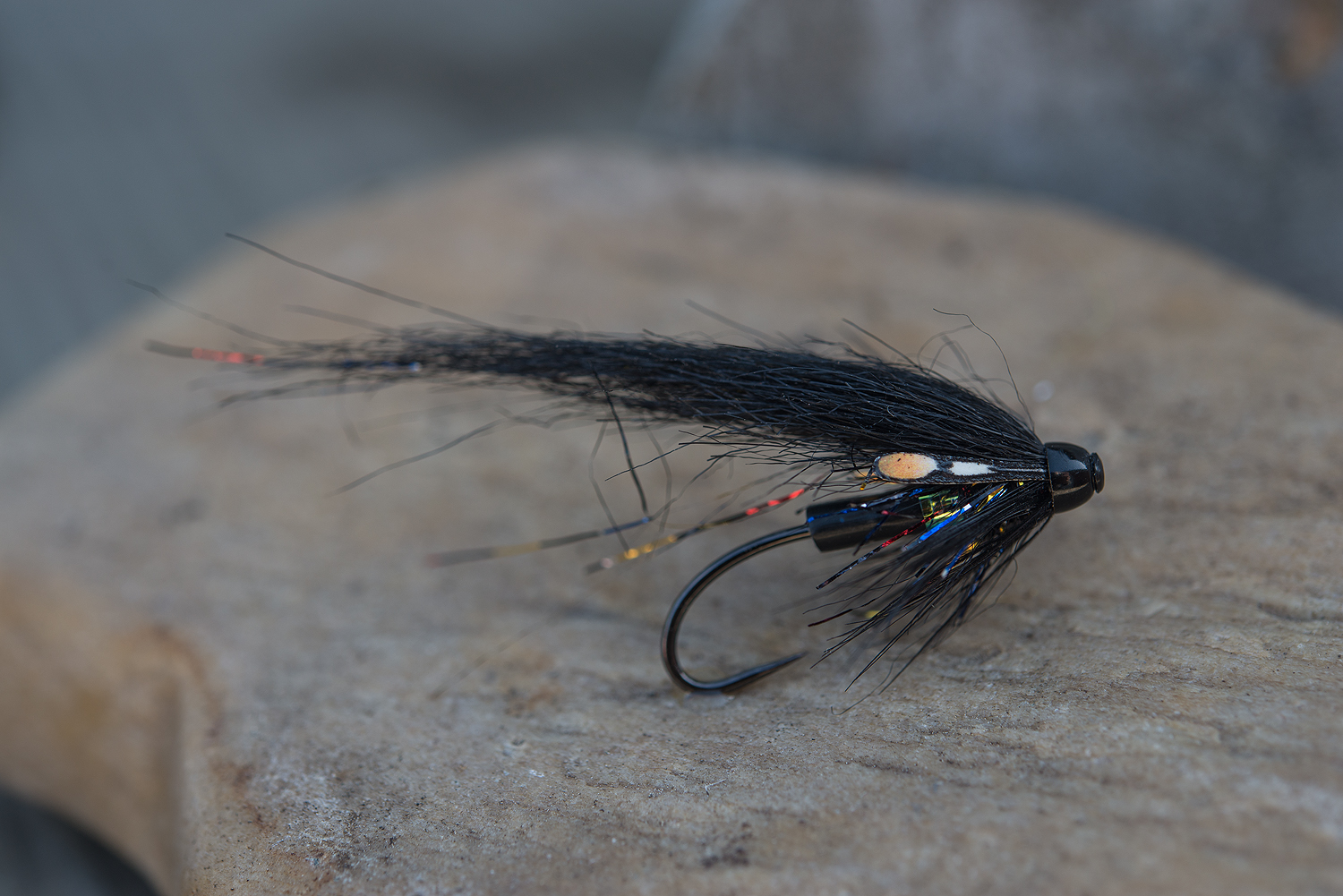 All colours are good – as long as they’re black…

Amongst the old fly fishers along the traditional big sea trout rivers like Karup, Ribe and Simested there was a saying when it came to fly patterns: All colours are good – as long as they’re black. Traditional, Danish sea trout flies prove that that wasn’t always the case, but that’s a subject for another blog.

I wish every one a good opening on Friday the 16th. Remember to observe the general regulations that are still in effect with regards to COVID-19.